DODGY hit LIVERPOOL, LEEDS on Back To Back Tour and Dodgy Day in Scotland

OK, we have two biggies this week for Dodgy on the BAck To Back Tour, where we are playing two albums in their entirety; Stand Upright In A cool Place the latest album by Dodgy ("They've just made the record of their career by a country mile" - thank you Word Magazine) and our debut The Dodgy Album.

It's the two big 'L's - LIVERPOOL (oh, Liverpool) @LomaxLiverpool tonight (Thurs May 23rd) and then LEEDS @CockpitLeeds tomorrow.
Liverpool because it's where it all began for Dodgy, certainly our recording career as The Dodgy Album was recorded in Parr Street Studios (@parrststudios) at the tail end of 1992 and early '93 - the studio was called Amazon back then and owned by the band Genesis and Leeds because May 24th is the actual day 20 years ago that The Dodgy Album was released. Please send all cards and flowers to the dressing room please.

DODGY have just returned from the last two Back To BAck dates around Scotland, 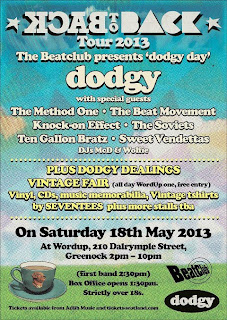 Dodgy Day in Greenock on Saturday and then Edinburgh on Sunday and as predicted it was a merry old occasion all round, hence the delayed bloggin here.
We arrived at Word Up (@worduptxt), the venue in GREENOCK at around 4pm in the afternoon and it might be construed that certain members of the local congregation were a little pished as Dodgy Day had been in effect for a few hours - we had some catching up to do. Organiser of the event was our good friend McD and other bands he had chosen to play with us were outstanding and top gents to boot, well certainly the ones we saw - The Soviets (@TheSovietsLive), Knock-On effect (@KnockOnEffect1), The Beat Movement (@BeatMovementThe) and The Method One, who featured a face we remember from a few years ago on bass, Sheer Taft who was signed to Creation. Incredible musicians and musicians being musicians we allowed ourselves to be persuaded by McD to attend the aftershow party.

EDINBURGH was as majestic as usual even though it was grey and cold. 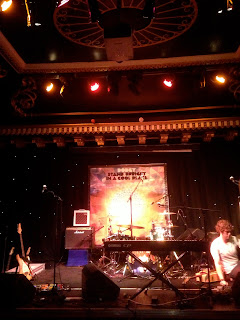 The venue was the Voodoo Rooms (@voodoorooms), a beautiful place above a fantastic pub called the Cafe Royal that served rare single malts - it would have been rude not to. It was great to bump into dear old friend @scottmuldoon from @TheBluetones, who's greatest claim to fame was almost certainly appearing on the sleeve of 'Summer Fayre'  the very first release by Dodgy. Scott looked on fine form and discussed the idea of The Bluetones reforming - our lips are sealed.
We continue to be humbled by the general response out there to us playing these two albums in full, again we are sure there were some tears in the room in Edinburgh and that's not just from Stu who is playing bass with us and mislaid his pint.

We are gutted to here that the venue for our Bangor date on the Back To Back Tour has fallen through and been forced to cancel but hey, this is rock and roll there are bound to be casualties.
LOVE - LIVERPOOL - LEEDS