We wondered for moments, how wise it was to add a little diversion to promoting the new album by Dodgy, 'Stand Upright In A Cool Place' but on Saturday our Northern Soul all-nighter in Wigan hosted by Dodgy turned out to be a resounding success and suggested that in fact we aren't mad to have written and recorded our own 'northern soul' single. Thank you to everyone who came and danced... As mentioned in the preview podcast, the idea came to us a few months ago after seeing how well our cover of  the late great Frank Wilson's 'Do I Love You (Indeed I do)'  was going down at the early Summer festivals.  So Dodgy set about writing and recording our own northern inspired single and had the idea of hosting our own northern soul all-nighter - all that was needed was an appropriate venue. Enter the ever diligent Wing Commander Berry, Dodgy's Northern attache who found The Rose Club which was formerly the Monaco Ballroom and what a find; sprung dance floor, balcony and indeed it had held a soul night in Wigan in the early 70's before the Casino opened it's doors.
It was a great to see a whole bunch of faces, old and new and good to hook up with Brian Cannon. We know Brian from our early days, he's got a bunch of Oasis artwork to his credit amongst a great portfolio and his current photographic project is called Northern Soul - A Photographic Journey , his new amazing photos and he brought his camera along on Saturday - we'll put a couple of his shots (of us ;-) up here. 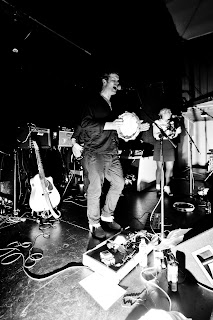 We were aware from the beginning that we might produce varying reactions of the tribal variety, especially if we succeeded in pulling in some of the more devoted northern soul purists. A minority were not very keen at all,  you might even describe them as hostile but as the aim of the whole venture was to create something special and vibrant around music Dodgy love, so if a few were offended (hopefully for not too long a time) then so be it. We were front-line participants in the indie snob wars of the 1990's, so a bit of northern soul outrage wasn't going to derail us too much. 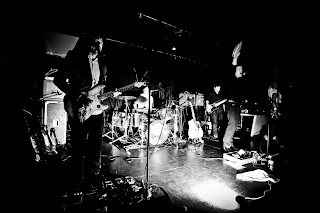 ... and by the end of the night, as the talc cleared, it looked from where we were standing, that everyone was left with a smile on their face and a spring in their step with an overwhelmingly positive reaction, from the 45 Carat Soul Club and the Wigan Young Souls who agreed to host the night with us, to legendary DJ Pete Mitchell ( @petemitchelldj a regular down the Casino back in the day) who interviewed me for his Soul Time show on Absolute 60's. It should be up on his Mixcloud page here http://www.mixcloud.com/soultime/

One thing we knew was, that if Dodgy was going to release a northern soul single then in the spirit of the music, the main format we should release it on should be vinyl 7-inch. These days Dodgy don't have a record company to do all the practical work so it was an interesting adventure getting our recordings from the masters onto vinyl.
- CZECH REPUBLIC - EVESHAM - NEW YORK - WIGAN -
It seems that most vinyl now is manufactured in Czech Republic, so considering the songs were recorded in Vale Studios near Evesham in September, mastered in New York and arrived in Wigan via Eastern Europe just in time for the first date of the tour in Leicester, our little songs have had an International adventure to rival Phileas Fogg himself. No wonder they are so popular.
In fact interest in the single has been so phenomenal that in a couple of weeks it will also be available for download. Don't worry, we'll let you know when.

Quite a few years ago when I, drummer Math, was doing a series of Northern Soul shows for what was then the BBC radio station in London, GLR, called 'Where's Wigan? The Londoners Guide To Northern Soul' I had no idea that I would be part of our own Northern all-nighter... in Wigan! It was an ambitious project but there's a lot of interest in northern at the moment and a film currently in production called Northern Soul that promises to be both authentic and very good indeed. In fact as we mentioned before, the Wigan Young Souls who helped us host the night, are featured as young dancers in the film and boy, what dancing we were treated to on Saturday.
We tweeted during the night that you forget what an absolute visceral thrill it is to hear Northern Soul cranked up loud with a dance floor full of proper dancers, giving it plenty. We heard some incredible tunes that night also, some of them very rare, there were nearly tears when they played three of our fav tunes - Little Anthony and the Imperials - 'Better use Your Head', MVP - 'Turning My Heatbeat Up' and Darrell Banks - 'Open The Doors To Your Heart'. So once again, thanks to all the DJs on the night. But while we're on a thanking tip we have to heap a whole load of thanks on the Soul Queen, Vanessa Best from Ultrasound who joined us for the St Albans and Wigan date. She is simply incredible and we love playing with her. If you haven't yet checked out Ultrasound's brand new album, Play For Today then you absolutely must, it ranks as the best album this year ....next to Stand Upright In A Cool Place of course. 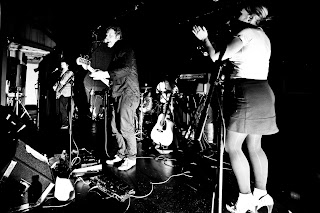 Now that the new single from Dodgy is launched, we need to spread the word. It was great getting a play on Radio 2 from Dermot the other Saturday, so give it a listen and if you like what you hear feel free to email / text your favourite DJ and 6Music etc. to let them know Dodgy are very much alive and well.

The tour didn't end in Wigan though. This week Dodgy are looking forward to live dates on Weds (24th Oct) near MILTON KEYNES @ The Stables, Thursday (25th Oct) BRIGHTON @ The Haunt, Friday (26th) ROCHESTER @ The Royal Function Rooms (sounds grand) finishing up on Saturday (27th) in BURY ST. EDMUNDS at the APEX. That sounds like a tour to us and expect to see at least half of you at one of these or another.

Got your tickets for the Dodgy Xmas show in London yet on December 14th yet? better hurry
www.livenation.co.uk/event/332672/dodgy-the-dodgy-xmas-party-tickets

Posted by Mathew Priest at 7:41 am No comments: