As we ease our way back in to the business side of this thing called show, we like to keep abreast of new developments, for instance in Side-Line music magazine a couple of weeks ago, there was an article headlined "CD-format to be abandoned by major labels by the end of 2012". It's not a particularly well written or edited article, ex: "It's a move that makes completely sense." ??? -  but basically its claiming to blow the whistle on how the major labels plan to abandon the CD-format by the end of 2012 (or even earlier) and replace it with download/stream only releases via iTunes and related music services.

It just struck us as interesting, as Dodgy have been putting a lot of effort into making sure that our new album Stand Upright In A Cool Place is as complete a package as possible. In many ways the loss of packaging, which is in essence what discontinuing CD formats would be, is something which takes this era of rockandroll pop music back to its origins. Digressing a bit and you may not be aware of this but for instance,  up to including and beyond Dodgy signing our major record deal with A&M, most record contracts include a 'packaging deduction' which was always a rip off and means that the record company deduct 25% of the artist's royalties for putting the release in a record or CD sleeve (a matter of pence in costs if you're producing in bulk). I was about to say, that hopefully in this digital age especially where downloads are concerned that 'deduction' doesn't happen anymore. .. Hey look - wrong... enter Mr. Chuck D.
It turns out that Chuck is in the process of suing Universal Music on the grounds that for each download that's bought for 99cents.. he gets just 8cents and guess what? The first thing that the record company do when calculating how much of the money they are going to pass on for sending a track from their server to your computer is in US language ... a 25% 'container charge for audiophile records' - yes, you've got it, a packaging deduction. Now as a practiced recycler, I hope that all you people downloading tracks out there are behaving responsibly and disposing of any extraneous packaging you find sensibly, if you're running out of disc space...now you know why, it's all the packaging from the downloads!! - Check out the story on Chuck D vs Universal Music @ http://www.digitalmusicnews.com it even has a photocopy of the royalty statement showing how it's calculated.

Anyway, where were we, ah yes... it would appear that in the 50's and 60's, packaging and/or artwork wasn't considered important, it was all about the 'song' in many ways, so not that different from iTunes etc. now. B-sides were considered throw away tracks and the format 7" inch vinyl singles, were mostly sold in functional generic single bags for each record company. Though it's ironic that even these have now become interesting design artifacts in their own right. Here are a couple, we particularly like the Tamla Motown one
- essentially though, it was just about the music - the vinyl and the packaging just being the means of delivery.

I don't think it was really until the advent of the second wave of vinyl albums that the real heyday of album artwork came into its own - the first wave of albums, The Beatles / Rolling Stones etc usually had to include a pic of the band.
There you go - a question - what was the first Beatles album not to feature a pic of the band on the cover?
And while I'm in Bob Holness mode - what's your favourite album artwork? (after The Dodgy Album by Dodgy, of course) - answers on a postcard. (or you could just reply below, after all, we're trying to save on paper)
For singles it was really the coming of punk at the end of the 70's where the art work and picture sleeves gave a colourful boost to the music and as CDs became the norm, the artwork still retained its effect, albeit on a smaller scale.

In the early days of Dodgy we were lucky that my brother was a graphic artist, he lived in the Dodgy house (nearly burnt it down, twice) and was getting to be as on top of his game with the artwork as we were getting there with the music. Again he was essential to the whole Massive Dodgy Vibe and was probably from that point of view, just as much one of its architects and still has a beady eye on what we are doing with the band. Here's the artwork for the very first Dodgy single ... the three of us are all to be seen in the photo somewhere, along with a young cherubic Bluetones or two and a variety of other Dodgy characters from our story. 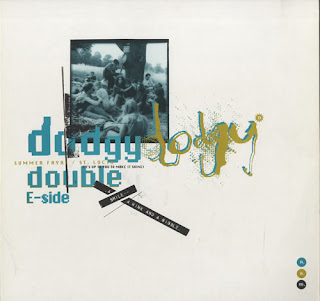 For the new Dodgy album we are extremely lucky to have hooked up with Russell Hardman (www.growabrain.co.uk) another inspired and inspiring artist. Let's say fate brought us together. Perhaps if we'd decided to come back releasing singles then we might not have bothered with artwork, or we may have even created our own Dodgy, Tamla Motown/Stax inspired generic sleeve, but as we began writing it quickly became clear that what we were creating was 'an album' - a collection of songs that mean a lot to us, need to be played together and deserved an encompassing artwork to complete the package. Which is why we are happy that Strikeback Records are making the album available as a CD and also a limited edition heavy vinyl version - you can order it now if you like, sorry couldn't resist the plug.  And that is why, for the moment, we believe that getting rid of physical formats of our releases, is definitely not on today's Dodgy agenda and while we'll probably be popping into Spillers Records in Cardiff tomorrow to see what bargains we can find before our gig at Club Ifor Bach in the evening... anybody know the Welsh for 'see you there'? x