When Dodgy embarked on the current tour and laid out our stall so to speak, we stated quite plainly that whereas a lot of bands are going out and playing previous albums we would be previewing our new album Stand Upright In A Cool Place  in its entirety. So excuse us for a slight nod, wink and a giggle and possibly even a sniff of the word 'vindication' when Paul Weller announced his week that he had come up with the novel idea that his new album Sonik Kicks will be performed in full this spring at two shows at The Roundhouse in London previewed as "Weller is hardly one to wait 20 years to be invited to perform his 'classic' album, he'd rather do it here and now, no need for nostalgia to play its part". Indeed... though thinking... if, for instance, we ever were to play  the Homegrown album from start to finish.. the first three songs would be 'Staying Out for the Summer', 'Melodies Haunt You' and 'So Let Me Go Far'.. just a thought.

And talking of tracklistings, song orders etc; the committee has sat, the votes have been counted, tempos assessed and we can now exclusively reveal that the song order for 'Stand Upright In A Cool Place' has been finalised. You might think that this would be the easy bit after the album has gone from actually nothing existing - thin air, to a germ of an idea, to writing the songs, to eventually recording the songs, to travelling to Texas and mixing then mastering the songs, to deciding on the album title and the artwork, to finally manufacturing the album so you can hold a physical copy (or not, see previous blog) in your hand - it's a long, arduous but obviously utterly rewarding experience. The one process I missed out there, which would seem like the easiest to some people but can in fact be the biggest ball ache out of them all, is deciding upon the track listing. Have you ever played your favourite album on shuffle? It's like alcopops, it's fun for a while, but it's not right. You like to think that the artist has sat for hours, painstakingly playing through every permutation of the tracks until finally deciding upon the correct order and most of the time, they have.

What we have tried to come up with, is a coherent collection of songs - It was great to hear Kate Bush weighing into the debate recently in a BBC interview saying  that she would hate to see the album die out and that listening to an album is a totally different and immersive experience, and although I applaud their pioneering spirit, I wasn't a fan of Kaiser Chiefs' 'create your own album' marketing around The Future Is Medieval, where you could choose your own 10 tracks from 20 on offer - rather like going into Pizza Express, being handed a ball of dough, and some onions, peppers, olives and mushrooms and told "there's the oven!" - well not exactly but you get the idea. For us though, playing the new Dodgy songs live around the country has helped point towards the best way to present the songs on the new album and also knowing that we will be able to release it on vinyl, hence the added parameters of splitting the songs into two sequences. Anyway we're satisfied that this is the right order for these songs - unless a certain chap in Swansea wants take up his ukulele in protest ...
I suppose one of the biggest sticking points was whether to end the album with Happy Ending which some thought was rather cliched but it's not every day you get such a powerful song called Happy Ending to...er...actually END an album with :-) and like Primal Scream starting Screamadelica with the obvious 'Moving On Up' or When The Levee Breaks ending Led Zep IV, we decided to walk down rock and roll's well worn path for this decision.

We had one live date this week in Cardiff @ Clwb Ifor Bach, which brought our tour of Wales to a close. Well a sort of tour - 2 dates, over 3 weeks, with two dates in England in between - but we won't tell if you don't, right ;-)
And what a belting gig, thanks to the audience who were so appreciative of the new album in the first half, so much so that they inspired us to include 'If You're Thinking Of Me' for the first time on this tour (are you reading Norwich ...see what I did there?). Also, nobody was punched, which can only be a good thing.

On December 10th Dodgy are taking a side step from the new album tour, adjusting the set accordingly when we play the This Feeling club night in London. The club is @ The Queen Of Hoxton and so there has been much idle chat and laughter about one of our fav TV shows Nathan Barley and indeed how prophetic it was/is, especially when you see blogs like Hackney Hipster Hate starting up..
So it gave us immense joy to see that it's not just restricted to Hoxton now (see poster below)
"Yeah mate, I'm off my mash, you got any speedo fraudsta shit, yeah? It's well fucking futile" 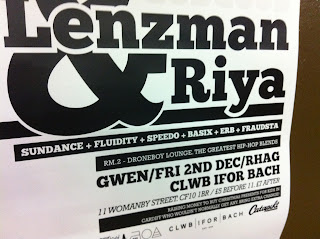 This Friday (Nov 25th) Dodgy play @waterfrontUEA in Norwich of which we have very fond memories as this was the venue back when we were a mere fledgling band, which was a real turning point for us where we realised that people actually liked what we were doing, big time, so we have high hopes. Norwich is also the home of one of our favourite bands The Rockingbirds (who are also working on new material) and as we made the official announcement for the album release this week it was nice to get lots of news pieces, NME etc. but surprising that on the usually reliable digitalspy.co.uk website, they added a photo of their own, god knows how they came by it, purporting to be Dodgy but in fact featuring just our Andy, along with two imposters; the legendary Andy Hackett from The Rockingbirds and um Razorlight's tour manager??? - can't quite work that one out. As it happens, for 5 minutes, sometime in the dim and distant past, Andy Hackett did step on the stage playing an additional guitar as part of Dodgy, he's currently playing guitar with Edwyn Collins and here's a vid of them playing the classic 'Rip It Up' at an acoustic set in London just last Sunday - Andy H is the one looking distinctly David Crosby on the far left....


And also in anticipation of Norwich, we will now revisit our occasional feature,
"ANAGRAMS and ACRONYMS of TOWNS and CITIES of the UNITED KINGDOM"

Hello, a few weeks ago we brought you NEWARK being and anagram of WANKER
Today we bring you NORWICH being an acronym of NICKERS OFF READY WHEN I COME HOME

Thanks now, until next time..