Dodgy Twin Towned in Swansea, cupcakes and "Yes, you may go to the Noel"

As everyone probably knows by now (with the apparent exception of one particularly annoying chap in Swansea), Dodgy are currently touring the UK with the specific brief of previewing live our new album 'Stand Upright In A Cool Place', before its release early in 2012.
The pace has stepped up a bit this week; we popped up in London @thebowerylondon on Tuesday before continuing around the country with gigs in Swansea @garagevenue, Warrington Osale Rooms and Stratford @coxsyard. The London gig was a one-off, as it turns out 'not so secret' gig, enabling us to get a few media/press types along. It helped that we've had a few weeks sharpening the songs up and at the end of the night the verdict seemed to be a smiley thumbs up from everyone involved. A big thanks also to The Rise, who were our guests on the night and did a great set.
Check out Chapper's blog for a more comprehensive take on London here clairchapman.wordpress.com

A slight departure from Dodgy activity on Wednesday, staying in London for an event at the Royal Festival Hall to see @stephenfry and friends celebrate the life, loves and hates of Christopher Hitchens, the journalist, free thinker, drinker and smoker. Sadly he has cancer and was supposed to actually be in conversation with Mr Fry but he just wasn't well enough, hence the legion of friends lined up to talk about the great man. Oh Boy and what friends he has - Sean Penn, Richard Dawkins, Salman Rushdie, James Fenton, Martin Amis, Ian Mcewan, Bungle and Katie Price*. OK, a couple of those were made up but a fascinating evening and I urge you to look up his books if you don't know his work. My favourite quote of the evening came from a text to Stephen Fry from Ian Mcewan who was by Hitch's bedside, "the Rolls Royce mind is still purring"

After that cultural interlude, it's back to Dodgy in Swansea. We perhaps regret alerting people to the connection between Dodgy and the film 'Twin Town'. The film set in Swansea, was probably the first major film role for Rhys Ifans and as 'Good Enough' is on the soundtrack, Dodgy performed at the film's original premiere there.

TT is a tough spirited film, peppered with dark humour, pretty random violence, vandalism and miscreant characters and now, as the three of us stood staring at the shattered window of Nigel's car,  with him one sat nav and pair of sunglasses the poorer and we having to cope with post-gig inyourface ramblings of an audience member complaining about the way we ordered the songs in the set, can only think that sometimes art reflects life in uncanny ways. We were just as surprised as our haranguer though, when behind us he was struck to the ground by a more supportive fan who had overheard the somewhat one-sided conversation. Now, Dodgy do not condone violence in any way but have to admit, it Twin Towned! the situation and curtailed the harassment, it was like a living embodiment of the Internet forum, where the trolls get policed by the decent folk. If he felt that he had a point, it was that we didn't play any old songs in the first half of the set but as mentioned above, we couldn't have made it clearer, that the whole aim of these current tour dates is exactly that; we are playing the new album in its entirety at the beginning of the evening and we also make efforts to explain that during the set - luckily the rest of Swansea responded with great feedback and we continue to be assured that we are doing the right thing. Onwards and upwards

Warrington, the following night was another sold out gig and calm by comparison, in fact there was a distinctly village fete feel, with Dodgy cupcakes for sale courtesy of a dodgy fan called Sarah Beardmore who is raising funds to rebuild an orphanage in Mombassa in Africa with the Girl Guides www.stoneoutward.co.uk/ 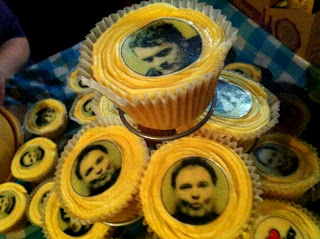 Dodgy, girl-guides, stop smirking you there at the back, no girl guides were allowed in the venue, apart from the lovely Sarah who's more like a Big Girl Guide. She also made a big Album cake which we should auction off really, shouldn't we? 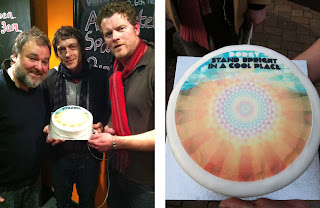 Nice support again in Warrington from Selfish Lovers and Bill Davro, definitely worth checking out.

And so all roads lead to the birthplace of the bard with a sold out Stratford Upon Avon show and a homecoming of sorts for Nigel and myself. It was also a chance to meet up with some fans/friends from further afield who had booked B&Bs making a night of it and the guitarist and bass player from the very first band that Nigel and I were in back when the 80's became the 90's - Four was the band and no, there are no Facebook or Myspace profiles, there was however a shout for one of our songs from way back then. Crikey!
On stage our guest support band was the mighty Electric Soft Parade who have been zig zagging across the country, alternating support slots with us and Noel Gallagher - there, a band endorsed by Dodgy and Noel, a sure ticket to success - anyway, after the gig they came up with a special request, asking our permission (bless em - as if it was needed) to not do the last two dates of our tour in Bristol and St. Albans, as they'd been asked to continue with Noel on his European dates. Well, what would you have said, a no brainer really, we hugged and wished them well on their way with a little wink that they should nudge Noel to listen to the new Dodgy songs, as we quite fancy being his guests when he plays UK arenas next year.
Another old friend that turned up in Stratford was Grandmaster Gareth, as well as being the creative force behind and in front of the ever wonderful Misty's Big Adventure , he is a pretty mean force with a mix tape - you might well have caught Misty's on tour with Dodgy before and if you haven't heard them yet they are on tour at the moment and have a new album The Family Amusement Centre out now.

While I'm on the plugs and recommendation tip, look out for the reissue/revamp of one of the greatest albums ever made - Quadrophenia by The Who. It's a towering piece of music and quite rightly Pete Townsend calls it his favourite Who album. It's an album we keep going back to and it never disappoints. This reissue comes with a CD of almost complete demos that Pete made in 72/73, which is amazing to listen to as the songs are almost fully formed and certainly makes me marvel at the genius of the precocious 27 year old. One of the greatest nights in the pantheon of great Dodgy nights is when we tried to blag tickets to see The Who performing Quadrophenia at the MEN arena in Manchester in 1996 only to be told that we could.. but only if we turned up and became the support band - I'll let you work out what the outcome was....

back in Wales this weekend, so see you in Cardiff on Saturday...x x