Dodgy looking forward to @thebowerylondon and 'Only A Heartbeat'

Having set ourselves the task of previewing all of the songs from the forthcoming album on the current tour, it's been educational to nurture the little buggers into blossoming flowers. Take 'Only A Heartbeat' for instance - it has always gone down well, especially on the recent gigs where it appears to be resonating with a lot of people. Nigel wrote it about losing someone very close to him and in Brighton @ The Concorde2 gig we had a request beforehand to dedicate a song to a chap who had died a year earlier, so that was the obvious choice and gave the whole performance an added poignancy.

Mormons and drunken men in England shirts are very high on my list of things to avoid, not far behind are using the words 'mature' and 'grown up' to describe our new album. It's lazy and an easy trap to fall into and I'm as guilty as anyone, whenever I feel those words forming in my mouth I immediately think of Dennis Locorriere and Charlie Landsborough, with their beards......er..... shit. (see pics) 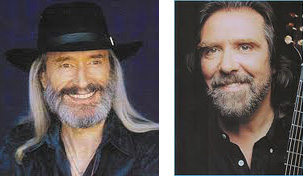 I prefer what some chap said at the weekend - "the new material is like Dodgy but a bit older and a lot better" - I know it's not ideal but as I was explaining to a journalist last week, we're not writing about the same things we did when we were younger and themes like religion, dishonesty, regret, hardship and addiction don't quite match up to the happy-go-lucky, chirpy image some folk have of us, but hey.

We now make a welcome return to a our occasional feature - Interesting Facts We Learn as We Travel Around The UK, part 73

This week is a busy Dodgy week. We are all looking forward to our not-so-secret gig tomorrow (Tuesday 8th Nov) @thebowerylondon. You will find this gig in Saturday's Guardian Guide listed as 'Stand Upright In A Cool Place' with no mention of Dodgy - that's because the set we play at 8.30pm will be the whole new album - perhaps if we'd added 'performed by Dodgy' it might have been clearer. Anyway that's what we are doing but are not ruling out any surprises or extra curricular activity later in the evening.
I will be staying down in London to see Stephen Fry interview the incredible but sadly, very ill Christopher Hitchens at the South Bank on Wednesday - before anyone comments, I realise that those words 'mature' and 'grown up' might come flying back to haunt me.. but hey...
Then its onwards and Dodgy will be coming to play for all of you folk in Swansea, Warrington and Stratford - This will be a good stretch of dates and I'm not sure Dodgy have been in Swansea since we played at the premiere of the film 'Twin Town' with our friend Rhys Ifans set in that fine city.. come along and I'll tell you the stories.... take care now