Dodgy Advent Calendar, give it a rest X-Factor, women and the NME Cool List

In 2012 the Olympics and the Euro Football finals take place but no Glastonbury Festival. Shame - but weirdly it got us thinking about the X-Factor and it would be prudent perhaps, to apologise to Michael and Emily Eavis for the following analogy and case that we will attempt to expound here.

On Saturday nights these days you will most likely find Dodgy playing a gig somewhere so the main X-Factor TV show doesn't taint our world but sometimes we are home when the results show is on and on our travels the subject still inevitably crops up in conversation - sad that somehow you know who Frankie Cockohza is. Our thoughts on this great national treasure of a TV show and similar programmes are sometimes sought in interviews but generally the answer is that we are involved in creating and making music, they are involved with making Saturday Night tele, you know like the Generation Game and the music part is just a bit of an incidental.
It does appear though, that the media and (usually the lower reaches of) the charts are full of winners and runners up of one year or another, of these competitions. Now, we're not going to suggest we can immediately freshen the air for good but here's a thought ITV, something you might do with your Saturday night cash cow, similar to that which Mr. Eavis does with his cows at the dairy farm which is the location for another much frequented institution, the Glastonbury Festival - HOW ABOUT YOU GIVE IT A REST? - even, like Glastonbury if it's just for a year. Michael Eavis understands that when thousands and thousands flock to a particular brand year after year an extraordinary amount of effluent is produced, things get tired and you've hardly launched Matt Cardle's career when another bunch turn up fighting to squeeze into the dinghy called 'No Dignity'.... Perhaps the public might want a Christmas song for the Christmas #1, not a prescribed cover suitable for one of a bunch of wannabee talent show finalists.

It's funny how lots of the pre-publicity for X-Factor suggested that Gary Barlow might write a new song for the winner (or dig up some discarded Take That out-take) but that seems to have slipped by the wayside and now the producers of X-Factor have come up with the brilliant idea for a shoe-in for the Christmas No.1; a version of..... 'Cannonball' by Damien Rice. Christmas and Cannon And Ball perhaps but Christmas+Cannonball...  take that for a Google search festives.
ITV/X-FACTOR producers - STOP, OK; just for a year, CAN you? WILL you? If people can do without Glastonbury for a year - the country can do without X-Factor for a year and then everyone can take their own view on how much they miss it...

So with the Christmas No.1 cannonballed.... it's a nice little lead in to Dodgy's plan to bring a bit of festive spirit to our new fans and old this year -  so from December 1st we will be opening the first door on our very own (fanfare - sleigh bells please)
*DODGY ADVENT CALENDAR*
- you just need to be on or subscribe to the Dodgy mailing list and then well... NOTHING.. as we will deliver the gift or link direct to your inbox every single day right up to and including CHRISTMAS EVE and what, ladies and gentlemen of the Yule, a tidy collection of gifts they are!
We hope you like the PRESENTS we have lined up for you, so if you haven't already, you can sign up to our mailing list here www.dodgyology.com  and while you're at it, why don't you invite your friends so we can all share the love this Christmas.

We will be bringing you this Calendar in partnership with Cancer Research UK and have an exciting little project that we'd like to involve as many of you in as possible that will require Minimum Effort for Maximum Satisfaction. All will be revealed later this week but look out for our first FREE GIFT on December 1st.

Last weekend we were in Norwich.
On the touring map of Britain it's deceptive. You think that it's just over there, when in fact, it's WELL over there, with only a farm track and footpath to get you there. Perhaps that's why our gigs there are so good, we think 'well it's taken us a day to get here, we may as well play our socks off'.
Here's a pic of me looking excited outside the Waterfront + a pic of Nige looking hard during the soundcheck 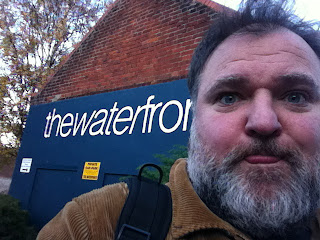 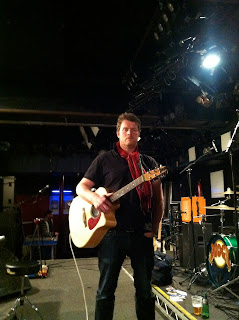 So there we were after a belting show, talking to some very juiced up but very happy Dodgy fans about how far we and they had to travel and I mentioned the journey back to Wiltshire and someone piped up... "Wiltshire.. ah, the Nebraska of England" A new one on me but got my interest as the American states are a bit of a geeky interest round here - yes, when pushed, we can name all 50.. AND point to them on a map. After pursuing this and coming to the conclusion that Manchester would be Chicago and Brighton San Francisco (yeah, bit obvious that one), I enquired what US city would Norwich be and someone made the brazen claim "New Orleans of course"..
without entering into a conversation why (I'll let you come up with all those bands and music from Norwich), this did throw up a bit of synchronicity though as 'The Big Easy' has been on our minds quite a bit recently, just having finished watching the first series of the HBO TV show Treme, which is based in New Orleans in the recent period just after Hurricane Katrina and was made by David Simon and the same team who made The Wire. If you haven't seen either show then you are missing out. The Wire is generally regarded as one of the finest pieces of TV drama ever but Treme beats it; it's outstanding, beautifully made and uses music in such an instinctive way. The Season 2 DVD is on our Christmas list.. if you were wondering what to get us.... *coughs*

We also grabbed a moment to go and see comedian Sarah Millican live this week and laughed our faces off. What a hilarious, naturally funny FILTHY woman, if you are one of these poor misguided puppies who believe that comedy is the preserve of men you should go and watch her live. It's an often repeated falsehood that women aren't as funny as men and both Christopher Hitchens and Germaine Greer have recently chipped in to this 'debate', proving that even the great thinkers make mistakes and talk bollocks.
In fact is it just me or has there been an upsurge in old fashioned misogyny in the media recently? There was Brian Sewell 'promoting' his autobiography in the Observer on Sunday recently demanding "Where is the female Mozart? Where's Mrs Shakespeare?"  Then there's the  very disturbing 'revelation' of the vile abuse that's aimed at woman commentators, spotted here in The Guardian
www.guardian.co.uk/commentisfree/2011/nov/07/abusive-sexist-comments-online
Just check out  #mencallmethings , 'trending' apparently, on Twitter but prepared to be shocked.
And finally, giving support to girls with attitude - it's good to see that the NME have been getting it right recently. Last week they were one of the first to report on Dodgy's new album and then they put the potty mouthed Azealia Banks on the top of their NME Cool List 2011, this is an amazing tune if ever we heard one, oh and congrats to Jarvis for his inclusion and for those that haven't seen it  No.s 11-13 are taken up by the members of Dodgy.. apparently. Over to you Azealia...

So just two more dates left on the current Dodgy tour - Bristol Fleece on Dec 1st and our final gig in St Albans @ The Horn the next day, which might prove to be rather large so we have ordered in some spare bibs and nappies just in case.