Dodgy on the TV and radio, apology for gig cancellations 'Only A Heartbeat' film and Stone Roses Heaton Park tickets

FIRST OFF: Dodgy would like to apologise again for having to cancel our shows in Inverness and The Shetlands that were meant to be happening next weekend.
Dodgy hate to cancel shows, it's not something we've ever liked doing but a great friend of the band was taken away from us by cancer at a young age and his funeral is next Friday. We are in the process of re-arranging these shows and hope to be up in Shetland soon as it is an ambition of ours to play there - we've heard some great stories.

It's been a couple of months now since the new album by Dodgy 'Stand Upright In A Cool Place' was released and we continue to get plenty of messages from folk with plenty of compliments and saying how much the new album means to them, which in turn, means a lot to us. Obviously this is the kind of feedback you might hope to get after working on an album but one of the big plusses this time is that a lot of people are saying that this is the first Dodgy record they have bought
- where have they been? Nevermind, better late than never.
There, did you spot the joke? beware there may be a few more of them, you may not realise it's a joke when you read it as you probably won't laugh but that's the point, they're sort of stealth jokes.

Last Tuesday we took to the stage at The Lexington in London for the 'A Word In Your Ear' event hosted by The Word magazine, it was our first full electric band gig for a few months, in fact since Worthing in March, The Word has been really supportive of the new album and it was a privilege to be asked to headline their night this month. They were very hospitable and brought out the best in us, Boo Hewerdine & Brooks Williams were also part of the night, playing tracks from their transatlantic collaboration 'State Of The Union' - well worth checking out. There's a great review of the evening here: www.wordmagazine.co.uk
And some pics (thanks Twitterers) 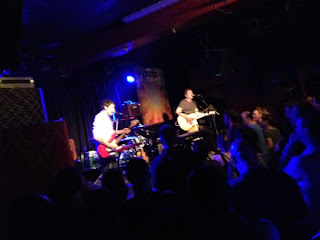 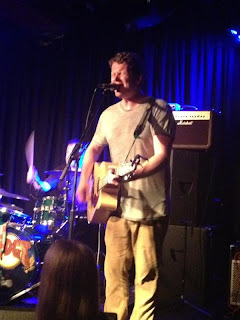 and the beautiful crowd ;-) 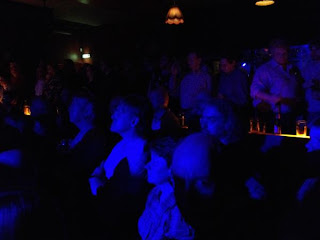 Our day in the big smoke of London was packed with activity and stuff to do, no hanging about in the dressing room for Dodgy these days. Before we went onstage we bundled ourselves on the tube to get to Leicester Square for an interview with @gordonsmart for XFM radio. Gordon is also the editor for the Bizzarre column in The Sun newspaper and I hate to say it, but Gordon is actually a decent and upstanding chap. I know it's a bit like finding out that Tom and Jerry actually got on and it was all an act. He tells a good story as well, so I traded my Una Stubbs and Julie Goodyear stories for some hair-whitening stories about Paul Daniels and Jimmy Tarbuck and a story about Mike Tyson that will keep you awake at night. Just find me at the next gig and buy me a drink, I'm the drummer ;-)
DODGY will be part of Smart On Sunday on XFM this Sunday 6th May 12-3pm

Dodgy's time in London is a bit like a buffalo to the Native Americans - every bit of it gets used. So as soon as we'd played the last note of our set at The Lexington and said our thank yous, we were in a convoy of cars heading to the canal round the back of Kings Cross to shoot the last frames for the incredible short film that has been made for the next single from Dodgy, a revamped version of the track 'Only A Heartbeat' from the new album. The film maker, Kris Thompson, was first brought to our attention as he was the guy behind this amazing film from the riots in Ealing last Summer. Instead of using his camera phone like most people, Kris took to the streets with his HD digital camera

Kris is editing his film for 'Only A Heartbeat' in super quick time (sorry that sounds like an App!) but we hope to have a trailer available next Tuesday (May 8th) to coincide with Dodgy appearing on BBC Breakfast. Oh yeah, we forgot to mention, Dodgy have been asked to appear on BBC BREAKFAST!!! next Tuesday with Susanna and the lesser spotted Turnbill. Yes, finally the mainstream media are getting on board - where have they been? Nevermind, better late than never. There's one of them jokes I warned you about.

So besides the unfortunate cancellation of the gigs mentioned earlier, our other gigs over this next week are definitely STILL HAPPENING.
We have to give a special mention for DUMBFEST this Saturday (5th May) which takes place in Bordon in Hampshire, we are doing an acoustic set and it is an event set up in aid of the Teenage Cancer Trust so well worth supporting.
Then it's off to the Lake District for a gig in Kendal at Bootleggers on Bank Holiday Monday(May 7th), sounds good to us. The next one is up to Scotland next Wednesday 9th May at Electric Circus in Edinburgh, if you live in Scotland and can get to that one will be great to see you there - for details and other gigs visit www.dodgyology.com.

And finally, due to a previous blog you are probably aware that I spent an hour on the phone securing tickets for the Sunday night performance of the Stone Roses at Heaving Park on July 1st. Which pleased me greatly at the time and caused much gloating. WELL, it looks like Dodgy have been offered a slot at The Eden Sessions in Cornwall that day and as much as I love the Stone Roses, I don't love them as much as Dodgy so I am auctioning my tickets. Contact me at info@dodgyology.com (subject- Stone Roses) with a sealed bid for 2 tickets and the proceeds will go to King Monkey World in Dorset. Or something. We will let you know who won in a couple of weeks.

Be in touch very soon, unless you want to get in touch before then.

Posted by Mathew Priest at 5:09 pm