Only A Heartbeat - new single from Dodgy and short film

DODGY – ONLY A HEARTBEAT (released June 11)

“A second chance will never come
Keeping on ‘til you’re done
Don’t waste a moment of a single day...”

When it came to helping put together some words for the release of our new single - something they refer to in the industry as a Press Release (you see, we can impart some of our superior knowledge and experience and be educational here as well) we were struggling ourselves and are indebted to the journalist Terry Staunton for taking on the task and summing it up with the following, on the button, words:
----------------
The sentiments of Only A Heartbeat, the new single from Dodgy, strike a universal chord. It’s a powerfully emotional song about loss and, perhaps more importantly, healing, speaking directly to a hurt all of us have faced, or will face at some point in our lives.

Oftentimes, a blow can throw us off balance, leaving us grasping for the words to try and make sense of what’s happened. Articulacy evades us, as we struggle to process our thoughts and find a way to move forward, and Dodgy’s Nigel Clark was no different – until music guided him towards, if not total understanding, at least a kind of acceptance, a glimmer of light in the darkness.

“In June 2008 my older brother died, totally out of the blue,” he says.
“I felt really lost; if I was a turtle, it felt like I’d lost my shell, I’d lost my shelter.
But I got to thinking about when my heart stops, I’ll be with him again."

“I was walking round my studio, which I do quite a lot, just pacing, and the words kept
coming into  my head:
‘Feeling, knowing, you’re only a heartbeat away.’
It was very simple, but very cathartic.”

Already a firm favourite in the group’s live set, Dodgy have heard stories from fans of how Only A Heartbeat has helped them deal with losses of their own, the song’s reassuring lyrics and tender melody offering genuine comfort.

In common with many tracks on the critically acclaimed album Stand Upright In A Cool Place, it addresses big themes with maturity and intelligence, clear hallmarks of the older, wiser 21st century Dodgy. It’s been 16 years since the release of their previous album, back in the heady ‘90s when the band delivered a seemingly endless procession of memorable tunes we took to our hearts (Good Enough, Staying Out For The Summer, So Let Me Go Far, If You’re Thinking Of Me, Found You, Melodies Haunt You, the list goes on...).

After such a long lay-off, there was bound to be questions as to whether Dodgy could recapture the magic of old, whether the muse was still there, whether they still had the instinctive knack of crafting joyously persuasive music that made us want to dance, sing, everything. The answer to all those questions is a resounding yes.

They’re still deftly fashioning the pop thrills of yore, but the bulging scrapbook of enthusiastic thumbs-up reviews for Stand Upright... are a testament to the fact that the new songs of greater depth and substance, of richer meaning, have been embraced by all who hear them, and that Dodgy have returned to the spotlight just when we needed them the most.

The exciting, young film-maker, Kris Thompson was first brought to our attention when he took some amazing footage of the riots in Ealing (just put Ealing into You Tube, it's the first video). We decided to ask him to produce the series of short films we made about the songs on the new album.
Here's one of the interviews; for the track 'Raggedstone Hill'

At one of our live shows with Dodgy, Kris was moved by the fact that people were coming up to Nigel afterwards, asking for the lyrics to Only A Heartbeat to help them over recent loss - so much so that he wanted to make a short film to accompany the song.
Interpret the song how he sees it, as all good film makers should

The resulting film is quite remarkable. We knew he was good, but not this good.

The film was having a dramatic effect on the few people we showed it to, and we realised that it was a different creature altogether to a pop video, so that's when we started talking to homeless charity Crisis. they saw the potential and were very keen to come on board and use the message of the film to draw attention to the vital work they do and especially their No One Turned Away campaign.

Chief Executive of Crisis, Leslie Morphy, said: “Sadly, what happens in the video is all too true for an increasing number of people as rough sleeping is on the rise. We would like to thank the members of Dodgy for supporting our No One Turned Away campaign calling for a real safety net so that no one needs to face the horror of sleeping rough.”

Dodgy have worked with Crisis before so when Kris Thompson pitched this story, we felt it would work for Only A Heartbeat. Homelessness is the most visible sign that some of the most vulnerable in our society are being let down. And there seems a tendency at the moment to vilify these people, "they’ve failed, they’ve done it to themselves" – therefore it’s okay for us to ignore them or even worse despise them and hurt them.  These individuals aren’t different from us, they are us - except something’s happened, there’s been a crisis – in the case of the man in the film, a bereavement. It’s estimated at least 70% of homeless people have mental health problems, they need care and they need respect. Mainly due to the economic downturn, rough sleeping rose by 23% last year. Society is about protecting everyone within and this includes the most vulnerable. Homeless charities like Crisis and St Mungos are seeing a rise in the number of people on the streets… and that’s just not acceptable in the 21st Century" 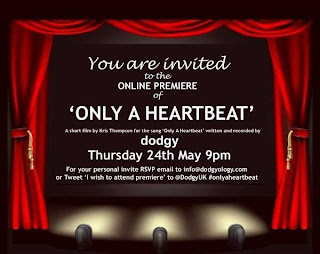 This being the week of the Cannes film festival we saw no reason why they should have all the red carpets so we are going to have our own ONLINE PREMIERE of the Kris Thompson film to accompany 'Only A Heatbeat' this THURSDAY evening MAY 24th at 9pm, followed by a short Q&A on Twitter and the Dodgy Facebook page with the film-maker and some members of the band. Please comment on Twitter using #OnlyAHeartbeat


CHECK OUT this trailer for the Kris Thompson film


Crisis is the national charity for single homeless people dedicated to ending homelessness by delivering life-changing services and campaigning for change. The charity’s award winning education, training and employment centres offer practical and creative workshops to over 3,000 homeless people a year in an inspiring environment together with formal learning opportunities that lead to qualifications and finding work. Sign up to be a Crisis campaigner and join the fight to end homelessness http://bit.ly/LlHD02?

Finally, if you would be happy to use social media to support Crisis, it would be great if you could tweet about the No One Turned Away campaign or post something on Facebook. Feel free to write your own, but an example tweet about the campaign would be: ‘Urgent: Write to the Housing Minister to tell him no one should be forced to sleep rough #nooneturnedaway @crisis_uk http://bit.ly/JwhLen’

Dodgy will be playing live this Friday May 25th at the Corn Exchange in Hertford. Come along.

Posted by Mathew Priest at 8:27 pm