What Are The Rules For A Band Playing Classic Albums Live? - Discuss with Dodgy

DODGY have already announced that in May and June we are going to be doing a series of gigs - the Back To Back Tour, where we will be playing our latest album 'Stand Upright In A Cool Place' in its entirety along with our debut The Dodgy Album which we can hardly believe celebrates the 20th anniversary of it's release this year. Check out the full list of Back2Back dates @ www.dodgyology.com

Having decided to play both Stand Upright In A Cool Place and The Dodgy Album in their entirety we have had some preliminary discussions about what the ground rules for this might be - and if there's any give and take in 'entirety'? The fact that both albums clock in between 45-50 mins each at least makes the timing of an evening make some sense but there won't be much room for the 'hilarious' between song dialogue for which we are known.... but that might be a good thing ;-) 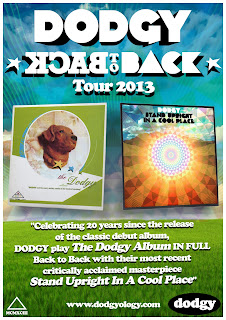 What about the set list?
When you play an album in it's entirety are we expected to follow the track listing exactly as it is on the album, or is there some freedom to swap things about a bit? The Charlatans have done this a few times haven't they? Perhaps we should ask @Tim_Burgess and the gang.

Of course, when you reach the 20th anniversary of something you might be expected to have picked up a bit of experience and of course we have.. of course we have! Back then though, when we first signed to a major record company after releasing the early singles on our own Bostin label, we might have been a bit naive, artists can be easily 'influenced' by record companies, especially at that time when record companies were more free and easy with their hospitality. For instance, a bit of coercion might come into play when a band like ourselves is deciding on a track-listing for an album and record company bosses aren't subtle about disturbing the obvious natural order of things - a label tends towardswanting to position singles and potential singles towards the front of an album running order even if it doesn't offer the most artistically flowing journey.  So when we come back to look at The Dodgy Album, we discover that the three singles 'Water Under The Bridge', 'Lovebirds' and 'I Need Another' are tracks 1,2 & 3 on the album - we were supposed to have creative license/control - got well and truly hoodwinked there.
So for the live experience, yes, we might like to kick things into action with 'Water Under The Bridge' but then get into the meat of the album and play 'Stand By Yourself' or 'Grand Old English Oak Tree' before returning to the other singles later. Is this breaking the rules though? Are any of you (or worse still, people not reading this) going to get upset that the songs aren't in the expected order even if, reviewing the order we might have structured the album differently in the first place - and then there's another issue of is it OK to hold certain tracks back altogether to play in a possible encore? We'll come back to that one.

Now, how true to the recorded versions are we expected to stay? Of course we can't help ourselves interpreting these songs as we are now but, for instance, could we do a totally acoustic version of 'As My Time Goes By' and/or do we play what was the 'campfire version' of Never Again - rather than the album version of the song. We've heard a story, that there are people who write to the BBC complaining that the same car and numberplate have appeared in different dramas, saying something like "surely a villain in Sherlock shouldn't be driving Dennis Waterman's car from New Tricks - do we have to be wary of trainspotter Dodgy fans, with no disrespect at all but will there be complaints if Dodgy 'interpret' our own songs?

Another real conundrum (and perhaps you could help here) is which album should we play first - Stand Upright In A Cool Place or The Dodgy Album?
From our point of view, just the fact that we can't/haven't come to a decision yet, is testament to the quality and different dynamics of both albums - we will probably change the order of which of them we play first and see what works best - we'll take any comments on board though for the first of the Back To Back gigs.
This also brings us back to the sticky subject of encores - could we be really cheeky though and save one song from each album to put into the encore? Come on, surely we could? But would that then be technically not playing each album in it's entirety? How do you define 'entirety'? - becoming a bit philosophical now. It's a relevant point - if you went out for a meal and had a spectacularly delicious main course, no matter how good it was, it would be a bit weird to save a tenth of it until after you had finished your desert, just because it was SO tasty, wouldn't it? Hmmmm....

We are seriously thinking about what other songs might appear in encores as well. The format for the Back To Back gigs will be to play the two albums, with perhaps a short interval between and then if the response is good (wouldn't like to assume we would get an encore of course) if we DO get an encore we might be looking at an opportunity to play three more songs if we are lucky.
Spoiler - now look away anyone that thinks when an artist comes back for an encore it is spontaneous but hey, these things are often thought through beforehand and planned, so for this tour we'll do a bit of Penn And Teller and let you backstage into what we might be thinking.

As those of you who have caught any of this year's acoustic gigs with Dodgy, we are also well underway into putting together a bunch of quality NEW songs that so far have been very well received - we'll probably take the liberty of teasing you with one of these but maybe featured in the middle of an (encore) sandwich as it were. For the other two songs the bread (and butter) of the sandwich, we will be choosing two songs from Homegrown, Free Peace Sweet and other singles etc. and then there is 'Big Brown Moon', a song which never made it onto the first album but nearly did and though it was a b-side was always part of our set from The Dodgy Album onwards.
Again, we are prepared to get Vox Pops out early on this. Once you have bought your Back To Back ticket, let us know what song from the Dodgy cannon you would also like to hear in the encore, let us know which gig you are going to and comment here, on Facebook send an email to backtoback@dodgyology.com , or Tweet us @Dodgyuk using hashtag #bandsplayalbums , the more public banter there is, perhaps the better.

And what if there is the chance we could get a couple of special guests along - the Liverpool guest list is already looking stupid so we might think of getting at least one of them to sing for their supper as it were. It comes back to that question of how purest is that 'entirety' concept supposed to be? A special guest joining us for a vocal or instrumental - is that spoiling the experience or enhancing it? What do you think?
There are probably other issues we haven't even thought of yet but at least we are beginning to address things - one thing is sure, these are going to be BIG nights.

Next week is UK Budget week when there be lots of discussion on the pros and cons of Keynesian economics so to coincide we will be having a Dodgy Keynesian weekender, with a short residency on Friday (22nd March) and Saturday (23rd) in Milton Keynes @ The Watershed ( @WatershedMK )- it's a lovely intimate venue, great people and Friday is already Sold Out with only a few tickets for Saturday remaining. Should be good.