Well folks, we made it.
A Summer diary packed as full as any Summer we've ever had. If you saw Dodgy and enjoyed us then thank you for coming down, if you didn't then I hope you get to see us soon as we're playing as well as we've ever played, and we played EVERYWHERE. (OK, not Glasgow, but we will soon). It certainly felt like we were following the Olympic torch around Britain at one point. 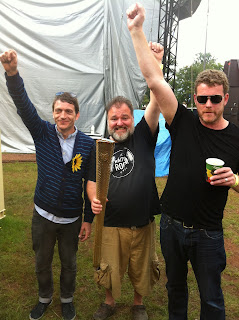 We played our last festival of the summer last weekend at Off The Tracks in Donnington and then  finished things off with a storming show at one of the UK's largest scooter rallies at Mersea Island in deepest, darkest Essex. It has been a great Summer for Dodgy, and with only a short pause for breath we get back on the road to keep spreading the word about Stand Upright In A Cool Place, the new album by Dodgy with a short Scottish jaunt, a tour in October to coincide with our Northern Soul single, a Wigan all-nighter and a big Christmas bash in London to round off the year.
We are already missing that festival stage though, so if we get a call from Festival No.6 asking us to pop along and play the new album, we won't take much persuading - if they can pull that off it looks like a great event.

There was an article in The Guardian at the beginning of the summer with the headline "The great British musical festival washout" you can read it HERE
it focuses amongst other things, on how the British weather and the fact that Glastonbury didn't happen this year had caused many festivals to cancel and get poor turnouts. The weather factor is obvious but for the life of me I just don't get the Glastonbury one; other festivals complain when Glastonbury happens that they take all the ticket buyers.... and then blame them when they have a year off for not getting people in the 'festival mood'. Uh?? You know, imagine if there was a god and one day the world woke up and there was no Macdonalds - can you imagine all the other burger producers and sellers being up in arms? - "Oh no, with no Macdonalds on every street corner, how are WE going to get people into the burger mood ourselves?" The answer is make a fantastic burger with plenty of exciting fresh trimmings and make sure you market it properly and to the right audience, maybe?

Well Dodgy were certainly in the festival mood this year and we didn't need Glasto for that (we are happy to wait until next year for that). Encouraged by the great response to the release of our new album Stand Upright In A Cool Place, we made a conscious decision that summer 2012 we were going to get out on the festie circuit, cementing the fact that Dodgy are back - with all the trimmings and no chaff - rain or no rain, Olympics or no Olympics.
To add to the challenge, where ever possible, we added a smaller club gig before each festival weekend as a warm up. Of course playing so regularly we didn't really need to warm up every time but we wanted to get to a few of the UK corners we hadn't been for a while and in fact some of those nights were as memorable as the festivals themselves.

We kicked it all off way back at the start of May with a low key, acoustic performance at Dumbfest, not a massive festival as such but had a great night and pleased that the overall event raised over £4,500 for the Teenage Cancer Trust charity. Lakefest near Tewksbury next where we bumped into the band @MissingAndy for the first time this Summer (we played with them at Brentwood in July also) who went down an absolute storm plus we also encountered the mighty @ChesneyHawkes. Here's a boy that doesn't think twice about breaking all the rules. When you play a festival set, it's always a good trick to throw in the odd cover to get the crowd going but old Chesners took that idea and fucking RAN. He started with Summer of 69 and Oasis and didn't stop with the 'Best of Absolute Radio' playlist till he reached his 'one and only' hit at the end. We were impressed with the boy's shear gall. Good on him really as the crowd went bananas. And we had to follow him.

As June arrived we helped Portsmouth, ahem, celebrate the Queen's Jubilee at the Historic Dockyard which was all lovely until the heavens decided to empty ALL of Portsmouth's quota of rain for the year in one 20 minute burst. Still, we had a good time with @TheQuill AKA Mark Morriss who was on before us and we managed to get a version of Grassman in with the phenomenal Vanessa Best from @Ultrasoundband guesting on vocals. It wouldn't be the last time we had a night with these two sparkling characters this Summer. 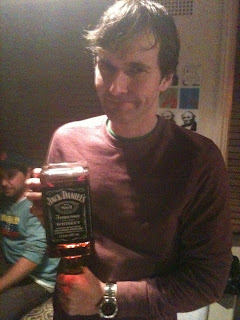 Dodgy memory: On our very first tour with Dodgy, as no one really knew who we were, we sent the tour dates to the NME, that's it, just the dates and then invited any promoters or music fans to suggest or promote the gig on that night. It turned out to be a winner (we still have friends from those dates) and ended up playing a mod rally, a festival, a working men's club and someones garden - the variety of offers we got this summer reminded of those days.

Another highlight from June was being invited to play at Windsor Race track, it was Ladies Day. Can't say too much about that except that as we were being fed as much free wine and lasagne as we wanted, with our feet up watching the races (and the ladies) from our own box above the race track, I think we all glimpsed a little bit of what heaven might be like.
We mentioned in a previous blog, we had tickets to go and see The Stone Roses in Heaton Park on July 1st but we got an invite to play for The Eden Sessions which we couldn't refuse. Happily there were no regrets, it was a fantastic day, a highlight of the Summer in fact as we played to a capacity crowd in front of a lemon grove in the Mediterranean Biodome. 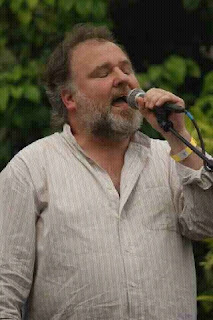 JULY arrived and we had been slightly overwhelmed by the advance Twittering from @NibleyFestival who's hard promotion work paid off and they got an early sell-out, such a shame the rain came so heavy that weekend and we had to abandon set but Nibley still stands out as one of the best and friendliest UK festivals, please invite us back ;-)
Great to see and play alongside ASH and our old friends @mileshuntTWS and Erica at Guilfest and we ended July with the fantastic @CampBestival and @KendalCalling - two brilliantly organised, stand-out festivals for us. Kendal  Calling was especially great as we bumped into the @shedseven boys who are always up for a laugh. Dodgy had so much positive feedback from all the shows and we appreciate everyone who gave such an enthusiastic response to the new songs as well as the selection from our back catalogue. Raggedstone Hill went down especially well at Kendal, you loved it.

In August, it was nice to get our own direct connection to The 2012 Olympics, which was no surprise as we are known for our athletic physiques. The last time Dodgy played in Hyde Park it was from the back of a lorry at Speakers Corner and the band got arrested, this time we were invited to play as part of an event organised by Absolute Radio and BT. We weren't quite prepared for the size of the stage/event/audience but the sun shone and as the screen parted after showing a LIVE Gold Medal from the velodrome cycling, it was lovely to see a sea of smiling faces, about 25,000 of them, thank you all who came to that one. We had our own close up sniff of gold medals back stage as well. 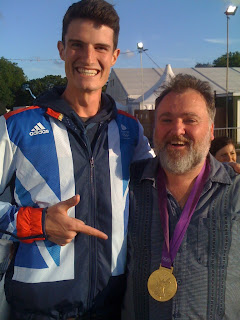 A few festivals became casualties in August but we did have a great time playing out the back of a kebab van at Newquay Boardmasters festival. If you're sixteen and you wanna go somewhere to get drunk - this is place for you.

Then on to our second annual bash at the Four Crosses in Shrewsbury where we were reunited with Mark Morris, Vanessa and all the Shrewsbury nutters and what a splendid night it was. Looks like it may well turn into our own little Dodgy Fest - watch this space.
From there we travelled the half hour to Weston Park for the first of our V Festival appearances. V festival features a selection of artists across the pop spectrum and as August also marked the return of X-Factor to our TV screens, we'd like to offer a piece of evidence that perhaps the judges can spot talent when they rub shoulders with it. We give you Mathew and @officialtulisa 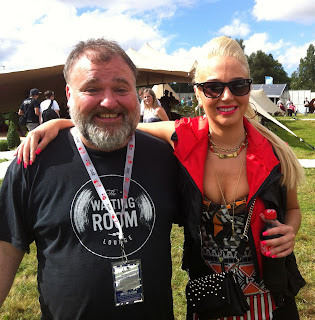 ...and we finally got to see The Stone Roses. First we thought we would miss them as they were on the different day to us but we got to open the festival at the midlands site and then headed off to Chelmsford arriving just in time to catch them and we are so glad to say that they didn't disappoint. It was quite an emotional night as The Roses have always been such an important band to us from hearing Made of Stone on the Gary Crowley show on GLR in 1989 via the 'King Monkey' episode and playing with them at Pilton Fayre in 1995 and to finally see them in such good form with the original line up at V -so it was good 'closure' for us, as the Americans call it.

So that's the 'Dodgy Do Summer' tour over with, we're going to try to recharge the old batteries in time for our next event - Dodgy Do Shetland (and Aberdeen and Kinloss) on Sep 20/21/22.
Then it's the BIG night in Wigan where we get to launch our Northern Soul 7", believe me folks, this new song from Dodgy is an absolute belter, one of the best we've written. It goes by the working title of WagonWheel. Can't wait for you to hear it.

We have also tried an experiment and pull together a lot more first hand material on Dodgy at festivals this summer via Storify with a lot more video and photos etc. You can check out the results HERE - let us know what you think
Storify - Dodgy - A summer of festivals 2012
Take care folks and stay in touch

Posted by Mathew Priest at 9:58 am