OH WELL, Easter is over, chocolate eggs eaten and the lord is all risen like a well baked cake. It's been a good time for Dodgy to regroup, refresh and review the situation and consider the next phase of Dodgy 2012 - and exciting it is too.
We have already achieved much more than we expected with the release of a new Dodgy album and 'Stand Upright In A Cool Place', continues to stand it's ground. We probably have you to thank for that and word continues to spread as day by day we get an email or see a complementary tweet, so all good there.

After a lot of discussion, feedback from you and talks with our label, it seems that everyone agrees that the next step would be to release a new 'single' from the album - but how do you pull a track from it's comfortable little space that's been made for it in the album track listing?
Well the answer is, that first you dust it down, change it around a bit and make sure everyone thinks it's up to the job. As to choosing which track, we also took into consideration the feedback we have been getting and which song(s) have been going down well and getting the best response from the live shows.
Now we can reveal exclusively, that the song that's been chosen as the second single from 'Stand Upright In A Cool Place' is (insert fanfare)..... 'Only A Heartbeat'.
For the new single version we had another listen to the master tapes and sent them back over with our ideas to Matt Pence in Texas, who has revisited the track and done a sterling job - we are sure you will agree when you hear it.

We are currently finalising a May release date for the single (we'll let you know when actual release date confirmed). Now that the decision has been made there's lots to do. We'll be going into Vale Studios as soon as we can to work on a couple of new tracks to go with it, we've asked Russell (Hardman) to do the artwork and hopefully there'll be a short film/video to go with it. As these things happen we'll let you know - Hey, Dodgy have a new single coming - spread the news.
First stop for the new single will be getting it on the radio and as we speak, promo copies are making their way to all DJs, producers and radio shows now.
If you want to be one of the first people to hear the single and request your favourite DJ to play it then send us an email to info@dodgyology.com to let us know which DJ(s) you'll be contacting and we will send you a personal link to hear the new single.

IN MAY there are a whole bunch of gigs coming up with Dodgy playing live including a trip to Scotland and even the Shetland Isles. We are also hoping to pop into our favourite T-Pot Studios with Robin Evans who worked on the album with us, to do a bit of sneaky recording (might be a surprise in store when you hear the results of that one)..
As we mentioned in the previous blog, it all kicks off with a special London gig for Word Magazine, headlining their 'A Word In Your Ear' night at The Lexington on Tuesday May 1st. Just added to the line-up is Boo Hewerdine and Brooks Williams - Boo Hewerdine was the creative force behind the band The Bible and he's hooked up with American slide guitarist Brook Williams for his new album 'State Of The Union' - so should make for a very special night.
For tickets for A Word In Your Ear' with Dodgy click HERE
And don't forget RECORD STORE DAY on Saturday April 21st when it's Dodgy Live In Leeds. 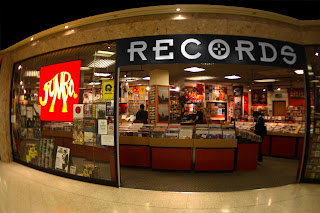 This is a worldwide event to support record shops. We were hoping to release an exclusive limited edition picture disc of the album for RSD but unfortunately time and practicalities got the better of us - Russell even did the artwork and sent it through to us for approval, to say it would have been a thing of great beauty is an underestimate (gets teary) but unfortunately it won't be hitting the shelves in the foreseeable future. So, instead we are going to be playing a special live acoustic gig at Jumbo Records in Leeds, one of the best independent record shops in the country, alongside a whole bunch of cool bands including The Staves. Then after that we'll be jumping from Yorkshire to Lancashire to play another acoustic gig in the evening in Accrington at Bohemia.

This post is written from the drum seat of Dodgy and as drummer I get invited to quite a few drum related events, which I don't tend to turn up to because I don't generally like drummers, thugs, the lot of them. But I decided to go to the Zildjian Artist's day at the Hard Rock Cafe in London, mainly because it was the Easter holidays and it was somewhere exciting to take my boy as an alternative to the motorway services + I'm sure there would be free stuff (a T shirt and sticks, thank you Zildjian). Anyway, I met a very nice chap who has got perhaps the cushiest job in Drummingham - he's the drummer for Blood Brothers in the West End and has been for 21 years!!!
Oh giz a job! I could do that!
He very kindly got us some discount tickets (they don't do free tickets anymore apparently, EVEN for me). I was told about the brilliance of Blood Brothers by one of the Dodgy Dollies, Ann (her and her daughter make a pilgrimage once a year) and she wasn't wrong. Written by Willy Russell who wrote Educating Rita and Shirley Valentine and is basically a heartbreaking story about class based in his native Liverpool, which as you probably know, Dodgy have had a lifelong affinity and love for. As musicals go, it's probably one of the best and well worth a pop if you've never dipped your toe in those waters - 24 years in the West End, they must be doing something right

Finally a word up for Graham Le Saux ( @graemelesaux14 ) and his mates. Those that follow us on Twitter might have caught some of the banter between Dodgy and Graham (he likes the album apparently) and now he's about to undertake a mammoth project as he's one of the key riders on a charity bicycle ride from Athens to London on behalf of Cancer Research and Great Ormond St. It's 2800km and takes place between April 23rd and May 18th. You can donate and support Graham and the team by going to the following web page http://uk.virginmoneygiving.com/fundraiser-web/fundraiser/showFundraiserProfilePage.action?userUrl=GraemeLeSaux

'Only A Heartbeat' x x