This is no time to gloat or get cocky, this is still a long road we travel on but we have to raise a smile at the positive reviews of the new Dodgy album 'Stand Upright In A Cool Place' coming through; four star **** reviews in Mojo and Uncut and a 3/5  in Q Magazine that we're being told reads more like a 4/5.
Of course, as an artist, it's hard not to but you shouldn't really hold much value in reviews, good or bad. Often it is down to the mood of that particular reviewer at the time, what knowledge (or baggage) they use to inform their review, or the intervention of a devilish sub-editor but at the moment we are as chuffed as a beaver with branches, at the feedback we are getting.
Arsenal are not a football team supported by anyone in the Dodgy ranks, though they were our local team for most of the 90's but wherever allegiances lie there was no denying the impressive comeback by The Gunners last week from being 2-0 down in the FA cup to Aston Villa - who wouldn't have been impressed? (unless you were a Spurs fan I suppose). So it made us chuckle a little bit when someone threw a Tweet out there referring to Dodgy as 'attempting a comeback'  like it's some kind of inglorious struggle to get attention. If you're facing adversity finding yourself 2-0 down it might be a matter of pride rather than anything else to get back in the game. More likely Dodgy's status up until recently was a scoreless draw with everything to play for - musically we stand by all the albums we have released and the new one is no exception, the only thing that cast a shadow over our past was the way the three of us parted company initially with a lot of things floating around in the press but we have never felt the need to answer or make a 'comeback' from that.

You may or may not be aware of the story that it was a certain Dodgy drummer that gave Ian Brown , singer with The Stone Roses the moniker 'King Monkey' (long story) which has now become universally embraced and when Mr. Brown got his career back on track with his solo stuff he called his debut album 'Unfinished Monkey Business' - well that's us and we had unfinished business too. We just wanted to take our time making an album that was a worthy addition to the Dodgy catalogue and something as good if not better than our last album together and now the reviews indicate that we might be on our way to achieving that... of course, not that we need reviews to tell us that *wink*
The other route we could have gone down, interestingly enough, is to lever control of the Dodgy back catalogue from Universal by re-recording songs already recorded and released (see Squeeze and The Wonderstuff) At the moment we receive no payment whatsoever from the actual sale of our catalogue recordings as it all goes to paying off some mysterious debt to Universal Music and it's not to say we won't be addressing that at some point in the future but we felt that we could create something good and new with our creative chemistry freshly revitalised. Of course, what the whole new project does, is put us in direct contact with the financial complexities of trying to make a living from our music, which brings me back to 'the man' from Universal again and the continuing debate about Spotify, something we continue to follow and comment on with interest.

Obviously the last thing Dodgy want to do is to 'alienate' our fans, we've worked out that it's not the best thing to do in our game, in fact we always pride ourselves on having whatever close contact we can, from the early days of stuffing envelopes with the latest missives from Dodgy spokesperson Sir George Winterbourne, to organising special evenings like the recent one at River Cottage. However, 'The man' from Universal recently said that singers and bands who withhold their albums from music streaming services, such as Spotify, are in danger of doing just that - "alienating their fanbases". He referred specifically to the fact that Adele, Coldplay and The Black Keys had all refused to let their latest albums be available on Spotify. For those bigger acts though, it's a different argument, though gut feeling is that the veto must surely have gone someway to helping the initial sales of Adele's album on XL and when you are talking about initial sales approaching millions it all becomes part of a long term marketing strategy.
At our end of the spectrum though, all the numbers become vitally important and it is quite a reasonable assumption to think that if 'Stand Upright In A Cool Place' were to be on Spotify then for the casual listener or new fan, especially if they paid for the subscription service then that would be enough and would probably not get round to buying music even if it was on their shopping/music wanted list. It's just rich coming from the man from Universal, who was addressing the label's 'investors Open Day' (sorry we missed it - will there be an artists Open Day?) where Spotify announced that it now had three million paying subscribers, with approximately 12 million more using its free service, all cosy cosy now Universal and Spotify are in bed together - why don't we trust them with artist royalties? hmmm? We don't have the answers only the questions?????

For the moment it's a nice feeling to be hands on with everything to do with the album release and particular praise must go to our Artist In Residence, Russell Hardman, who is the creative force behind ensuring that  each pressing of the vinyl edition of 'Stand Upright In A Cool Place' will have it's own hand printed sleeve. Here's some photos of the process that will hopefully excite more people than any discussion on the pros and cons of Poncify. Can't wait? Neither can we. 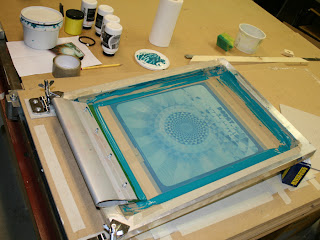 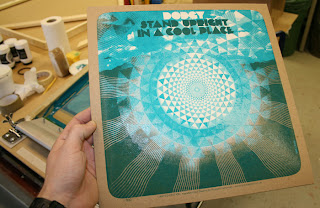 Thank you for everyone who has pre-ordered the album already from www.dodgyology.com and as Dodgy are asking you to cough up hard earned cash to purchase our wares we thought that we should do the same and put some of our pennies on the table.  There's been a lot in the press recently about the dearth of good guitar bands - so where are the saviours? Well there's Dodgy of course but there's been a lot written recently about The Macabees and Tribes flying the flag, so money has exchanged hands, CDs ordered from Amazon and a verdict will be posted when they've arrived and been given a good listen to see if they deliver the goods - anything else current we should be listening to?

Finally, you will find the Dodgy drums and guitar moonlighting with our 'classy' Northern Soul covers band, The Soulwinners in London at the Bull and Gate in London and stay close to our Twitter and Facebook feed for news of a secret acoustic DODGY gig next also in London on Thursday.