A photo session with Dodgy, a Dodgy tattoo and the latest gigs

As a band, Dodgy have never been very good standing around doing long photo shoots, there's not many bands that are. We had our fingers burned early on in our career with the photos for our first album; we didn't have any firm ideas and were persuaded by the record company that the input of someone with the job title 'stylist' and the photographer would be appropriate - the results, I can quite confidently say, would shame the most enthusiastic children's TV presenter - what were we thinking with those jumpers? Well, I can hear you now and you're right - we weren't thinking.
Since then we've formulated some kind of approach and try to use a photographer we know and trust, hence using our old friend Pat 'the professional' Pope (http://www.patpope.com/) for our afternoon photoshoot in and around Hertford last Friday. We were also very ably assisted by Annie, the head of tourism for Hertfordshire (not just Hertford or indeed Hereford as both myself and Nige got wrong trying to give her a mention on stage later) who showed us the more picturesque spots around the town, of which there are many. So not a bad afternoon at all really, especially watching Pat getting wound up by Annie's suggestions for photos -
"why don't you have them peeping from behind that tree?"
" WE DON'T DO PEEPING!"
Anyway, here's one of us not peeping - awaiting approval apparently... 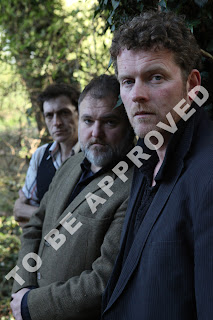 On the current tour Dodgy are giving people a full sneak live preview of the new album 'Stand Upright In A Cool Place'. As these gigs are a bit special, we didn't want to fall into the trap that a lot of bands do and focus on the big towns and cities and play any old night of the week, as we knew this one would be for the true Dodgy fans. It's fine if your audience is made up mostly by students and city dwellers but when a lot of you have jobs or kids or both and perhaps live out of town then to go and see your favourite artist can be a real baby-sitty, long drivey ball-ache and an expensive one at that. So we felt it was only right for "us to come to you rather than you come to us". Hence, we've downsized a bit and are going out to play some smaller theatres and venues in some of the smaller towns - hence Hertford and Shrewsbury last weekend, and indeed Guildford and St Helens and Frome and in fact most of the gigs on this tour.

And we certainly pushed the down-sizing to it's limit in Shrewsbury as well pointed out by Mr Tea in his comment to an earlier Blog post here. In fact the size down from pub function room we played is actually on the street busking, so we were definitely 'keeping it real' but as is always with gigs like that, we had a blast and the crowd were bananas. We'd met one of the organisers, Elliot earlier in the year when we played an acoustic show in Oswestry - see my earlier point about out of town places, well it don't come more out of town than Oswestry. We like Elliot because Elliot has a Dodgy tattoo, see below. 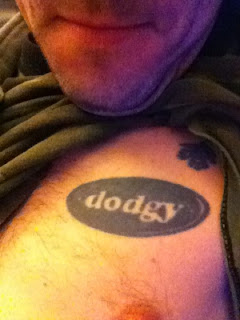 It's on his chest, we'd obviously prefer it on his forehead or neck, but chest will do. Elliot and his lovely wife very kindly offered me their spare bed for the night but I did have to think twice about taking up the offer as this brilliant Alan Patridge sketch was going through my head quite a bit. It was OK though, the door had a lock.


New songs Waiting For The Sun and Shadows seem to be going down very well at the moment, let's see what Guildford thinks on Friday (14th) at the Boileroom and then up to St. Helens on Saturday (15th) @ The Citadel - we're hoping a few will try and get over from Liverpool for that one and who knows, our old pal Johnny Vegas might be visting home.. looking forward to it..